Is this the world's silliest podcast?

This week sees the return of my comedy podcast series The John Dredge Nothing To Do With Anything Show to the British Comedy Guide website.  Nobody associated with the show was available for an interview so I decided to talk to myself.

John: Tell me about your podcast, John.
John: I'd rather not.
John: Oh go on.  Otherwise this is going to be a really short interview.
John: How much are you willing to pay?
John: Come off it John, you know I'm skint.
John: What? Let me check my wallet.  Ah - I see what you mean. All right, what do you want to know?
John: Well, for a start, what exactly is this podcast of yours all about?
John: I can see you've done your research.  It's a new six-part series containing spoofs, skits and strangeness, all in a sesame seed bun.
John: What are you on about?
John: No idea.
John: Does the series contain regular characters?
John: You mean people like avant-garde film director David Lynch and agricultural singer/songwriter    Farmer Collins?
John: Yes.
John: No.
John: You do seem to get interrupted during the show by The Actor Greg Haiste.  What can you tell me about him?
John: Well he's very influenced by Donald Sinden.
John: I'm so sorry - I literally had no idea.
John: That's literally all right.  We also literally have a number of exciting serials in the podcast such as The Adventures of Basil The Cylinder.
John: What's on earth's that?
John: Don't ask me, I only write the scripts and appear in it.
John: What do you say to people who claim your show is the world's silliest podcast?
John: Bing ting fning gring ling ping ting ning bing qing zing pling.  They usually go away after that.
John: I'm going away after that.  John, thank you for talking to yourself.
John:  No problem, John.

Hello folks hello folks this is John here folks. Series 4 of my silly comedy podcast The John Dredge Nothing To Do With Anything Show starts next week and I do hope you might give it a listen, as we’ve been working on this one for several months - it only seems like years. There are tons of strange sketches, peculiar characters and generally odd goings on, and we’ve packed lots of ideas and weirdness into each episode. Much of this is down to producer Richard Cray who is one of the best audio producers out there. I’m not sure exactly where he is, but I do have it on good authority that he’s out there.

The new series includes regular characters such as agricultural singer/songwriter Farmer Collins and avant-garde film director/amateur weather forecaster David Lynch. We must also put up with the return of The Actor Greg Haiste who insists on interrupting whenever he has a new play out, which seems to be every week. There are some fine turns from notably funny folk such as Anil Desai and Max Dowler who provide a host of nutty voices and impressions, Anna Emerson Out Of Sketch Group The Boom Jennies (who appears to be turning into Joyce Grenfell), mad continuity announcer Miles Eady, all-round comedy human James Shakeshaft, and Will Franken, who often ends really long sentences like this one. Katy Slater provides a host of excellent vocal performances an’ all, and I’m in it somewhere or other, possibly both. The whole shebang will be starting on the British Comedy Guide website on June 29th. You can hear Series 1-3 on there now, but not unless you listen to it. Until next we meet, this is me saying goodbye, so long, farewell, and in that order!

Here's a peculiar new comic strip from me and ace cartoonist Joseph Champniss... 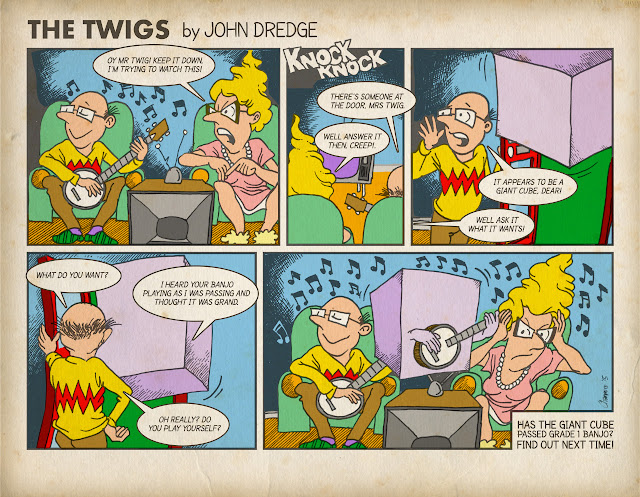