John Dredge and The Plinths release a new video for 'Rose Tinted Glasses' today, the second track taken from their debut, 'The Emergency EP'.

'We are often compared to Duran Duran,' lied John, 'so like them we are planning to release a video for every song on our EP. We also intend to lurk around on a yacht.'

This is the follow-up to lead track 'Going Down', which was featured on radio stations and podcasts around the country, notably on Dandelion Radio and Iain Lee's Talk Radio show. The video was created by John and co-songwriter Mark Hibbett, and is the latest in a series of short films by the award winning duo*. Previous films have been shown at LOCO and Kino London.


'May the plinth be with you,' said Dredge.  We are unable to offer further comment on this matter.

'The Emergency EP' is available on iTunes, Amazon, and all download sites, as well as directly from the band via their Bandcamp site  http://johndredgetheplinths.bandcamp.com.

*John was awarded the 60m swimming badge in 1977 and Mark won Best Turnip That Looks Like A Person at the 1997 Theydon Bois Village Fete
Posted by John Dredge at 05:01 No comments:

Coming soon - new video from John Dredge and The Plinths

Coming soon - new video from John Dredge and The Plinths

We've done quite well with 'Going Down,' our debut song, managing to get on Iain Lee's show and the John Peel inspired Dandelion Radio, plus we had Track of the Week on Wandsworth Radio and airplay on many other fab places.  High profile fans such as Danny Baker have also helped us out, and our next video will be released on Monday 26th February.  It's a short film so stand by your computer screens for that one.  Our EP is available from Bandcamp and all the usual internet-type-places... 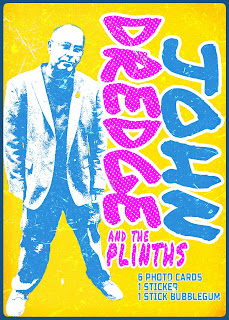 ‘THE EMERGENCY EP’ BY JOHN DREDGE AND THE PLINTHS OUT NOW!

‘THE EMERGENCY EP’ BY JOHN DREDGE AND THE PLINTHS OUT NOW!

The four songs are out now, accompanied by a video for lead track 'Going Down' filmed by the band themselves in Lincoln's Inn Fields. Other tracks on the EP include 'Alison Alien', a homage to John Hughes' legendary movie 'The Breakfast Club', and 'Rose Tinted Glasses', which features a full marching kazoo band.
'The Plinths cannot be gainsayed,' says Dredge, although nobody is quite sure what he means.
'The Emergency EP' is available on iTunes, Amazon, and all download sites, as well as directly from the band via their Bandcamp site  http://johndredgetheplinths.bandcamp.com.
Posted by John Dredge at 23:27 No comments: